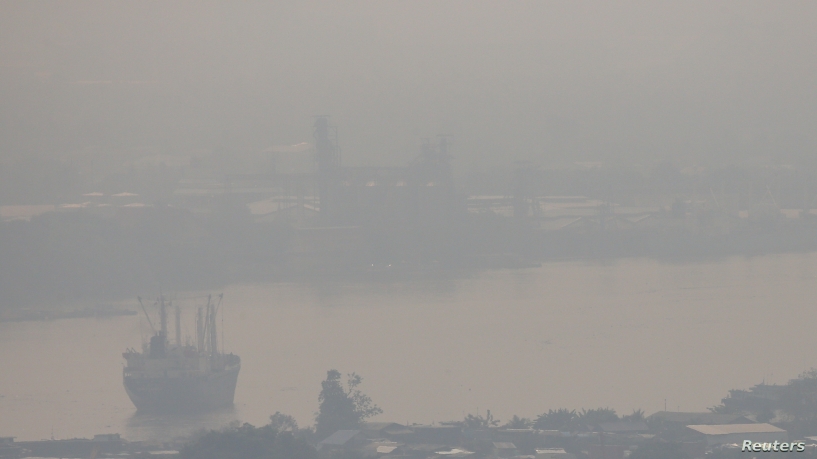 FILE – A cargo ship is seen through air pollution along the Chao Phraya river in Bangkok, Thailand, Jan. 11, 2019.

From January 2020, the United Nations International Maritime Organization (IMO) will ban ships from using fuels with a sulphur content above 0.5%, compared with 3.5% now.

The rules herald the biggest leap in how ships are powered since they switched from burning coal to oil over a century ago, but vessels will still be allowed to use higher-sulphur fuel if fitted with cleaning devices called scrubbers.

Closed-loop scrubbers keep most of the water used for sulphur removal onboard for disposal at port. Open-loop systems, however, remove sulphur coming through a ship’s smokestack with water that can then be pumped overboard.

“Were open-looped scrubbers ever a really good idea?” Bill Hemmings of the Clean Shipping Coalition told industry figures at the IMO’s headquarters in London.

Such systems could provide a cautionary tale on half-measures to tackle emissions, he said.

“Maybe in hindsight, we need to ask whether we would do things the same way and whether there are any lessons to be learned for climate change.”

The results have largely been inconclusive and the IMO itself has encouraged further study into the environmental impact of scrubbers.

“It’s a bit of a blind spot, and the optics of it are not great,” Alan Gelder, vice president of refining at consultancy Wood Mackenzie, told Reuters.

“Though some studies suggest the impact of open-loop scrubbing is going to be very small given the great volume of seas, which already contain many sulphates, what it’s doing is solving air pollution by producing a marine pollutant instead.”

“In areas such as the heavily populated Baltic Sea, which are more delicate and brackish, the impact would be more pronounced on marine life.”

The stated aim of the new measures is to improve human health, and in that regard they should have a significant impact. Combating greenhouse gases or pollution is not their goal, per se.

A study in the journal Nature last year found ship emissions with current sulphur levels caused about 400,000 premature deaths from lung cancer and cardiovascular disease as well as around 14 million childhood asthma cases every year.

Singapore and Fujairah in the United Arab Emirates have banned the use of open-loop scrubbers from the start of next year. China is also set to extend a ban on scrubber discharge to more coastal regions.

Worldwide compliance with the rules is expected to be almost 100%, and the change has rapt the oil, shipping and refining industries, which have invested billions of dollars in the switchover.

Scepticism lingers among some, however.

“There are all these huge changes,” one senior oil trader said. “But in the end you can still buy a piece of kit that just dumps it in the water.”